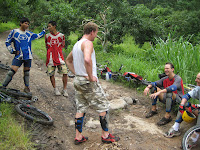 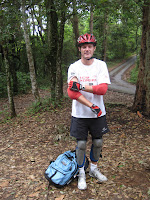 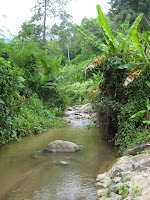 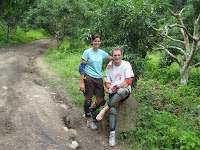 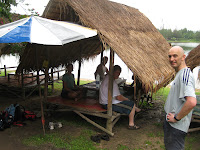 Yesterday, we went on a 'downhill' guided mountain bike ride from the top of Doi Suthep, a mountain about 15 km from Chiang Mai. It was really good, but incredibly tough. I think I had what Stephen might call a 'sense of humor' failure when I fell over into the mud after about three hours of intensive cycling. I was exhausted by that point.
We had signed up to do a ride that was 90 percent downhill and suitable for ambitious beginners. However, there were only six people signed to do any tours on our day so our guide took one look at us and said he was going to 'upgrade' our tour. As I was the only girl and two of the guys had signed up for the advanced/expert run, I knew I was in trouble. The upgraded tour really meant uphill. So, after pushing my bike up a few treacherous hills I was pretty tired. I really enjoyed the first few hours, but the downhill was pretty technical. Luckily, I have some experience bouncing over rocks and avoiding deep ruts so I managed to stay on my bicycle. The downhill was also incredibly steep in places. After a few hours we got to a village and I immediately perked up. I was really tired and ready for the promised lunch at the end of the tour. Unfortunately, our guide had other ideas. We ended up going on a tough, single track trail through the jungle and we had to keep stopping to repair bikes. Stephen alone had a puncture, a rear spindle break, a wobbly wheel, his chain came off and he got stuck in a river. Three of the other guys also had punctures and other problems. Fortunately, the guides had all of the equipment to repair the bikes, but it was slow going with so many problems. I was especially miserable when they had to repair a bike in the middle of the bug-infested jungle.
Soon, I was too tired to push my bike up any more hills. Stephen and the guide took turns with my bike. Fortunately, we were almost finished. I think the upgraded tour ended up being an extra 10km of uphill and difficult terrain. All the guys were impressed that I made it to the end and many said their relationship wouldn't have survived it. I managed to keep going, but Stephen was worried I would vent to him later when we were away from everyone. Really I was too tired to even vent...If we would have stopped in the first village it would have been perfect for me.
I really enjoyed my lunch and I slept especially well on the train to Bangkok last night. We managed to make it back to our hotel in time to use the outdoor shower and go for a swim in the pool to get all of the mud off before we jumped on the overnight train. It was a really good train. There were only four people in each compartment and you could actually sit up in your bunk. They even had curtains and reading lights. Best of all, they had a western-style toilet with toilet paper which made a big change from the overnight trains in China!
Posted by Becky at 23:16 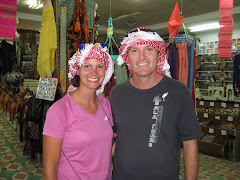